Are Interracial Relationships Approved by God? 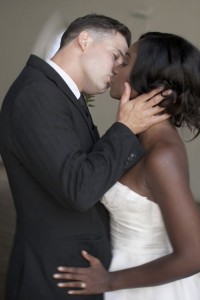 Have you ever wondered how God feels about black white dating or culture?  Some misconceptions exist as to whether God disapproves of interracial relationships.  For example, some extremist or fundamentalist religions may ban marrying someone of another race.  The Ku Klux Klan often cites religious motivations in keeping races “pure”.

What the Bible Says About Black or White Dating

However, if you base your reasoning exclusively on the bible, which is the recognized authority of most Christian religions, there’s really no reason to fear interracial dating.  According to the creation account in Genesis, all human beings descended from Adam and Eve.  Eventually the sons of Noah, Ham, Shem and Jephthah, birthed the various “races” of human beings, who would further be influenced by their location – the east, the middle east and eventually the western world.

Acts 17:24-26 further explains this when it says “And [God] hath made of one blood all nations of men to dwell on all the face of the earth.”  So whatever God creates, including the different races of human beings, is a good thing in His eyes.  God cannot create something evil or disapproved of—human beings make themselves disapproved by their behavior.

Why the Day of Pentecost is Meaningful

Many who oppose interracial relationships forget the entire point of Pentecost 33 C.E., when God’s holy spirit was poured upon a gathering of Christians.  This was done with the specific intent of welcoming gentiles into the favor of God, and not giving only Jews the chance to atone to redemption.  Now Jews and gentiles would be welcomed to partake in the congregation.  Eventually, even the Jewish law of circumcision, as a way of proving one’s self in subjection to God, was done away with about 20 years later, when it was decided that faith by works proved loyalty to God—not simply one’s race.  In the account of Acts 8:26, it was also said that Philip baptized an Ethiopian man, and he was obviously a black man.

Therefore, the idea that God doesn’t approve of interracial dating is mainly a thought from early white supremacist ideologies.  While it’s true some of these organizations may have tried to infiltrate religion, the original intent of the bible was all about acceptance and showing respect to people of other races.

It’s true that the idea of becoming “unevenly yoked” with a person you’re dating can be dangerous.  But this is in reference to marrying someone who doesn’t believe what you believe and doesn’t share your faith in God.  This can be dangerous to your faith and it will definitely creating a stressful environment.  You won’t be able to confide your deepest spiritual thoughts with a mate who doesn’t understand your faith.  This is why it’s important to find a partner that you’re compatible with intellectually and spiritually.

Interracial dating sites can help you in this regard.  Finding an attractive person who is also a member of a Christian church or faith is a great way to start your “evenly yoked” union.