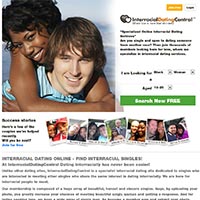 However sometimes the search engine ends up bringing these two portals together and the similarity is indispensible. It even so happens that the user gets confused and mistakes one for the other. Perhaps there could be a similar incidence with www.interracialdatingcentral.com which is similar to some other interracial dating sites that are present on the web.

I am not too sure about the fact as to whether both the interracial dating sites source is same or not. However, even if they are similar, it would have been best if they would have declared the same.

Apart from this issue it appears that the site is alright. There really isn’t something to really grab a lot of interest for the users. It looks like a site which is just enough to suit the purpose. There is nothing which would cause a user to sit here for hours. Rather a face book group would almost suffice to a similar purpose.
However the good thing is that there is nothing obscene or objectionable here. This is something very important in case of interracial dating sites.

The User security system is satisfactory and it seems unlikely that there would be instances of hacking and such similar activities. However, there could be some community rules regarding the verification process.
It is also noticed that if a user is not registered here, then he may find that his instructions are not executed properly. For instance, if a person is looking for White women looking for black men then one would find that there are some Asians, White men etc. This is a real turn down. Perhaps the site is not to blame as this may occur due to any wrong information given by the user.

I personally found this site to be well usable except for the fact that the payment would be a bit difficult to make if you are from another country.

On an overall consideration I would feel that the site has potential but they really need to pull up their socks or else they may fall.